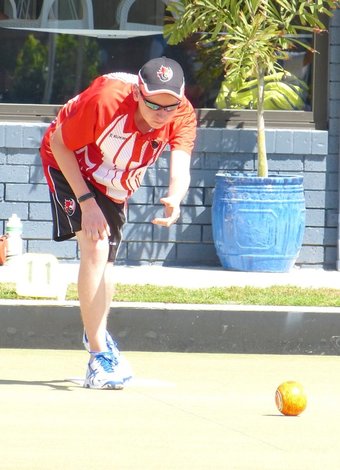 ​Top Nova Scotian Junior Lawn Bowler represents Canada in Australia
by John Siteman (LBNS Marketing and Public Relations Committee)
April 28th, 2016
As many Nova Scotian lawn bowlers are readying for the start of competition on the greens all over the province, one of the province’s best has just returned from competing against the top junior bowlers in the world.
Cameron LeFresne, 21, from Enfield, Nova Scotia just returned from representing Canada at the 2016 World Junior Championship, held at the Broadbeach Bowls Club in Gold Coast, Queensland, Australia. A member of the Wanderers Lawn Bowling Club in Halifax, he was selected to compete in the event by Bowls Canada Boulingrin, the National Sport organization for Lawn Bowling, after Canada received an additional spot in the top Under-25 championship in the world.
When asked about the experience when being interviewed by email, LeFresne was happy with his first time competing for Canada internationally, “My experience was awesome. I couldn’t have asked for a better team to go with”
LeFresne competed in the Men’s Singles event, as well as mixed pairs with his Canadian teammate Stirling Wood of Midland, Ontario. While not qualifying for playoffs in either event, LeFresne was pleased with his play throughout the tournament including a 14-12 Mixed Pairs win over strong Australian duo Corey Wedlock and Chloe Stewart. “Stirling bowled great lead bowls and made my life easy. It was a great game by both of us.”
An experienced competitor in Canada, LeFresne has won multiple medals in both the Junior National Championship and the Canadian Lawn Bowling Championship level. Last year he was named a member of the Canadian National Development Squad, one of the main parts of Team Canada. He quickly recognized the tough level of play at the international level, “The first bowl set the tone with each end. If you missed bad, the other players punished you for it. Because of that, I had to be on for every bowl.”
Attending the World Championship along with four of his friends from past Canadian Junior Championships and a top coach from Ontario made the experience enjoyable for him. “The team was really close. We talked every night about how things were going and what we needed from each other.” Outside of the competition on the greens, LeFresne along with the other members of Team Canada had the opportunity to experience the Gold Coast by visiting various tourist attractions in the area. His experience visiting Currumbin Wildlife Sanctuary was a highlight, with the opportunity to see some of the native animals of Australia.
Team Canada Head Coach Darryl Fitzgerald of Ontario has an optimistic view of Cameron’s performance at the event, “Cam bowled extremely well and ran into some tough opponents. He is a strong and mature young player that has the potential to be a top player in Canada.”
The experience of attending the World Junior Championship was an opportunity that this Junior Bowler will never forget. He now turns his focus toward the start of the Nova Scotian bowling season in the next few weeks as he prepares to represent the province, skipping the Men’s Fours Competition at the Canadian Lawn Bowling Championship at the Commonwealth Lawn Bowling Club in Edmonton Alberta, August 14-20.